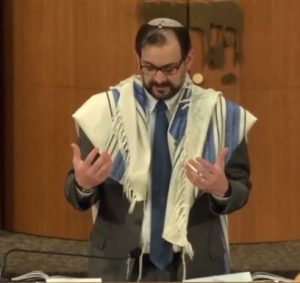 This week we begin the book of Shemot, or Exodus with the birth and upbringing of Moses. For a character that will occupy such a large place in our collective imagination, scarcely anything is mentioned about who he is, or where he is from.

“A Levite man and woman married and bore a son.  And overcome by emotion, his mother hid the baby for three months.” (Ex 2:1-2)

The sages argue that we are not told the family of the one who will lead us out of slavery exactly because, if we knew, we would assume all sorts of things about the quality of a man capable of such heroism. Instead, the Torah teaches us that any one of our families – any one of us could be called upon to take one heroic step in our lifetime.

The more we learn about this Moses the more we relate to him. He is everyman, he is you or me. He finds himself caught up in situations beyond his control, even before he encounters a burning bush, and truly has to make a choice.

Before the bush, Moses encounters God in the same way we encounter God. He grows up in relative privilege and wealth. He is surrounded by the injustices of slaves in Egypt, but thinks nothing of it, until one day, he does. “Some time  after that, when Moses had grown up, he went out to his brothers and sisters and witnessed their labors.” (Ex. 2:11)

The commentaries are puzzled. How on earth would Moses have known that these were his brothers and sisters? From where would be learn compassion for the slaves he must have seen every day of his life?

According to the sages, his was a conscious choice to engage. The midrash says, (Ex Rab 1:27) only when we set his mind to share in their distress did he witness it. So here is the first lesson of leadership.  At some point Moses will find out about his unusual upbringing. But not here, not now. All we know is that Moses looks out one day, and sees the injustice that has always been there. The message comes not from God, and not from his own mother who weaned him. It definitely did not come from the Pharaoh’s daughter who raised him.  But rather, he sets his own eyes and mind to share in their distress.

Moses acts swiftly and decisively when he sees one Egyptian taskmaster beating an Israelite slave. He kills him. But the door he has opened will not quickly close. Moses has taken but the first step on his road towards his destiny, and his quest to know God.

We are told that the very next day Moses finds himself in another test of leadership. He intercedes while two Israelites are fighting each other. In this situation he chooses a more diplomatic approach, he speaks to them. Perhaps we are seeing the evolution of his leadership style. Remember that Moses is royalty for all intents and purposes – he could just as easily have spoken to the taskmaster, or punished the Israelites quarreling. But he attempts dialogue.

I have a book on my shelf called Moses on Management that dissects the book of Exodus into bite sized chunks of wisdom to be applied to running a business. Delegating authority, empowering your team, staying focused on mission, and learning how to get water from a rock – these each get their own chapter. I am not interested in picking apart the story to that degree. But the experiences of today inform the experiences of tomorrow. And if we see ourselves in Moses, our capacity for learning and growth can follow his as well.

In the very next verse comes yet another test for Moses. Sitting beside a well in the land of Midian, seven daughters of the local priest arrive to draw water for themselves and their animals, but a marauding gang shows up and threatens them. And Moses rises to their defense – he drives them off. This time his own people the Israelites aren’t even involved. And yet Moses sees right from wrong, and he protects those most vulnerable.

In seven short verses we experience and entire course on leadership from the man who will one day stand atop Mount Sinai and become closer to God than anyone before or after. He will become known as a great prophet, and the perfect leaders for this moment in time for our people.

In this final scene, Moses fights against injustice even when his own tribe is unaffected. He doesn’t even tell them of his Israelite roots. When the daughters return home they tell their father it was an Egyptian who saved them.  In a way, we would understand if Moses himself wasn’t sure how much he was Egyptian versus Israelite. He does not fit with either society at this point in his journey. He has not felt God’s presence yet calling him to pursue justice or fulfill his destiny, or even simply to connect him with his true ancestors, Abraham Isaac and Jacob. That all comes later.

Whatever Moses has learned up until this point has come from, in the words of the commentary – setting his own mind, and focusing his eyes on injustice. Between two Israelites, between an Israelite and an Egyptian, and now between two groups, neither of whom are Israelite. He doesn’t know it yet, but Moses is preparing well for his moment to speak truth to power, before the greatest power in the known world – Egypt’s Pharoah.

A certain Levite man and woman once had a child, and with bravery and fearlessness, they brought him into a world filled with injustice. They sacrifices much to ensure he would have every opportunity possible, and he was comfortable. But somewhere deep in his soul, this boy knew he was destined for greater things than even Egypt’s palace could provide. So he set his mind and his focus on seeing injustice and fighting it. His path was not an easy one, but with persistence and determination, he became the leader his people needed.

On this Shabbat as we begin again the story of our people in bondage, liberated so that they might learn to liberate all people on earth; the story of the ways in which our people learned to let that message of liberty ring from the mountaintops, and roll like water down every river – may we rededicate ourselves to that destiny. May we remember not to take the path of comfort but rather place ourselves right in the heart of important conversations about liberty in our country and around the world. May we welcome the stranger, visit the sick, and keep faith with those who lie in the dust. The week ahead, this final week of 2021 gives us all a chance to make that New Years’ resolution, and to affirm we can.