May 6 Sermon from Rabbi Chernow-Reader

My phone rings with a friend of mine calling. She is in tears because she is pregnant. She already has children and always thought she wanted a bigger family. But not right now. It’s just not the right time. Her marriage is falling apart and she doesn’t think they will get through. Despite all of their degrees, she and her husband cannot find good jobs. The kids are hard and her mental health is collapsing. There is so much stress in her life and she knows she cannot be the mother she wants to be. This decision is so much harder than she thought it would be. It is not what the debate on the news portrays. She is struggling about what to do, but she is also deeply grateful she has the ability to make a choice.

She has the ability to choose for herself if she wants to have another child.  She has the power to decide what is best for her and her family.

The example I shared with you of my friend describes the situation the typical woman seeking an abortion in this country faces. Perhaps you have been part of similar conversations with the women in your life. Statistics show that one in four women in the United States has had an abortion.

The issue of reproductive rights has been headline news this week. On Tuesday, the news outlet Politico received a draft of a supreme court ruling outlining their intention to overturn Roe vs Wade.  The right for women to choose whether or not to continue with a pregnancy was codified in 1973, when the supreme court ruled that prohibiting abortion violates the right to privacy. The 14th amendment of the constitution provides federal protections for women who choose to have an abortion.

Reversing Roe vs. Wade will have horrifying ramifications for women. Most obviously, women will lose autonomy over their bodies and lives, and will lose the ability to decide if and when to become a mother. This decision is the most consequential choice a woman can make. But we will no longer be able to make this decision ourselves. What women do with their bodies will now be determined by the legislators of a particular state. If you live in some states, abortion will remain accessible, but in too many others, obtaining an abortion will become extremely difficult or illegal. Reversing Roe vs. Wade is an expression of fundamental distrust in the ability of women to make decisions for themselves.

This is not the country I want to live in or to raise my children in.

We see the consequences of taking away women’s autonomy in cautionary literature such as the Handmaids Tale. We see it in our Torah too. In Naso, the Torah portion we read in a few weeks, the magnitude of depriving a woman of agency over her own body is evident.

Naso contains one of the most demeaning assaults upon women in the entire Torah, the sotah ritual.  Speaking for God, Moses outlines procedures for when husbands suspect their wives of being unfaithful.  If a jealous husband merely suspects his wife of adultery, our text states that he “shall bring his wife to the priest.” Once the husband and wife are seated before the priest, the ritual of sotah begins.

This ritual is built around humiliating women. As the Torah recounts, the priest makes the wife stand before Adonai and forces her to eat a meal offering of jealousy and drink—what Torah calls the “waters of bitterness.”  These waters are the remnants of an oath sworn by the woman to confirm that she has not been unfaithful. This oath is written in a scroll which is then turned into dust. The dust is mixed with water and drunk by the woman. The priest then tells the accused wife that if she has not lain with anyone other than her husband the water will have no effect upon her.  But if she has, in the priest’s words “gone astray,” then, as Torah declares, “may Adonai make you a curse and a curse among your people. May this water that induces the spell enter your body, causing the belly to distend and the thigh to sag.”

What this affliction means is unclear. According to the Women’s Torah Commentary, the ritual is supposed to render a guilty woman infertile. If the woman is already pregnant, she will miscarry.

Throughout this ordeal, the wife is almost entirely silent. The only thing she can say is “amen, amen.” Think about how she must feel. She cannot defend herself or refute the charges. She is presumed guilty. She is forced to drink an unpleasant concoction. She is humiliated not only in front of a priest–likely the leading figure in her community–but in front of God as well. The priest tells her she will be a curse.

Sotah declares that if a woman cannot conceive, it is because of her supposed infidelity. If she is pregnant and miscarries, something the stress of the ordeal makes more likely, she is condemned as an adulterer. The sotah ritual piles one humiliation on top of another. It is rooted in the vulnerability of women in society and leaves women with no say over what happens to their bodies.

In the context of our text, a husband acquires exclusive sexual rights to his wife through marriage.  But the converse was not true. Husbands could have more than one wife and several concubines. His infidelities are supposed to be accepted unquestioningly by his wife.

While the sotah ritual is included in the Torah, it is unclear if it ever took place. Unlike other laws, it is described without reference to a particular incident and was later abolished in the rabbinic period.

I hope, I really hope, the sotah ritual was never used. But even if it was not, the fact that it is part of our sacred text means it exists as a threat to women.

Despite the horrors of the sotah ritual, these lines of Torah also show us how to reclaim power.

Instead of reading this ritual literally, we can read the parasha as cautionary tale. It warns us against creating situations that leave women vulnerable and subject to decisions about their bodies that are made without their consent.

Rabbinic literature emphasizes the importance of women maintaining agency over their bodies.  To give one example from the Talmud, in Bava Kamma 90a:13-14 we read: “if a man uncovers the head of a woman (without her consent) he must give the injured party four hundred dinars.”  About the same incident, the Talmud later states: “Rabbi Akiva rendered the assailant liable to give her four hundred dinars.”  Here, the text sides with the violated woman because control of her body was taken away from her.

The Central Conference of American Rabbis, the leadership body to which most US reform rabbis, including IHC clergy, belong supports reproductive rights. As the CCAR has affirmed, “Each person is entitled to make decisions about their own bodies and lives.  We believe each woman should follow her own inner compass when making decisions about her reproductive health free from constraints or impediments.” These words draw directly from Bava Kamma. They stress the importance of empowering each woman so that she has control over her own decisions.

These words proved more significant this week. If the draft ruling of the supreme court comes to pass, 26 US states will restrict women’s access to reproductive care.

In states like Texas and Alabama, women need to decide within the first six weeks of pregnancy whether she wants a child or not. But at this point, many women do not even know they are pregnant. Similar legislation is under consideration in many other states. In Indiana, legislators are asking for a special session of the state assembly to ensure that if Roe vs. Wade is reversed, abortion will become illegal here. Laws like these strip women of their decision-making agency. The impact of such laws will haunt women for the rest of their lives.

As states across the country attempt to strip women of their autonomy, others are maintaining their commitment to women’s rights. In 2019, the governor of our neighboring state, Illinois, J.B. Pritzker signed into law legislation establishing abortion as a fundamental right for women, proclaiming “In a time when too many states across the nation are taking a step backwards, Illinois is taking a giant step forward for women’s health. Today, we proudly proclaim that in this state we trust women.” In response to this week’s leaked Supreme Court ruling Gov. Pritzker reiterated: “Let me be clear, no matter what atrocious opinion the Supreme Court rolls out this summer in regards to Roe v. Wade, abortion is safe and legal in Illinois.”

The sotah ritual encourages us to do better for women. In particular, it implores us to ensure women have the power to make their own choices. This is the consequence of putting women in vulnerable, humiliating positions where they lack control and agency over their own bodies.

We can and we must learn to do better for women.

The sotah ritual is a reminder that the agency women possess makes a statement about the sort of society we are. We can all help to create a better society for women. We can speak up when rights are taken from women and we can vote for leaders who prioritize empowering women. We can teach younger generations of women to expect to take charge of their bodies, amongst other things, so that reproductive rights are never again threatened in this way. Like our rereading of the sotah ritual, we can change the narrative and experience of our culture to strengthen, protect, value, trust and empower women.

The sotah ritual is our text at its worst, but we can learn from it to create a society at its best.

May we all learn from this Torah portion so all people are trusted, valued and empowered so everyone, can make decisions about their lives to live at their best and thrive. 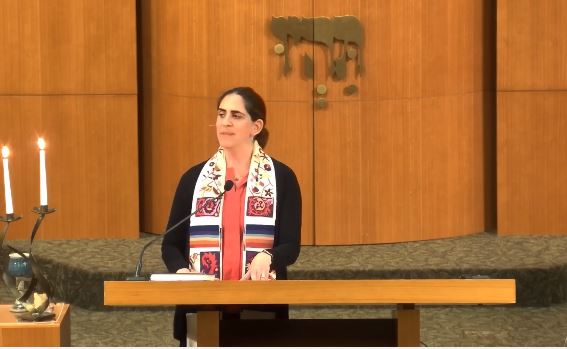