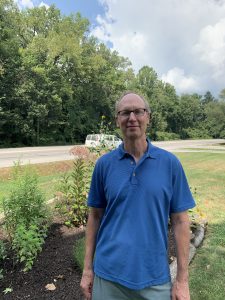 What brought you to Indianapolis Hebrew Congregation?

For Michael Sanders, the answer is simple… it’s Adamah (earth) Initiative.
Respecting the planet is deeply engrained within his being. It is an admiration that started early on, while romping around the woods near his boyhood home in New York. As an adult, that admiration turned to action. Sanders was behind the first eco-team in Indiana in the early 1990s. An eco-team, simply put, is a group of households that aims to establish environmentally-friendly habits. That could mean boosting recycling one month while focusing on cutting electricity usage the next.

He is now bringing those same ideas to Indianapolis Hebrew Congregation with Using Energy Prudently (UEP). Set to launch soon, UEP is ready to hit the ground running with a lofty goal: Reduce IHC’s energy consumption by 25% in next 3 years. Sanders explains that to reach that goal, UEP will be spearheading a handful of efforts. It starts with conducting an energy audit on the IHC building. From there, the focus will be on using audit results to find ways to cut down on electricity, gas, and water usage. According to Sanders, UEP will not be alone in this mission. It will have the support of a 10-congregation cohort with similar energy reduction goals.

The timing of UEP’s launch couldn’t come at a more appropriate time. The United Nations sent out a “code red for humanity” in its most recent climate report. The data from leading climate scientists shows there is no doubt that humans are responsible for our Earth’s warming. Not only that, humanity can also be to blamed on the influx of natural disasters. The solution? Drastic, immediate action on a global scale.

The word ‘global’ can certainly be intimidating. It makes us feel small and insignificant. But Michael Sanders urges you to not think of it that way. Little actions add up, he says. Choosing to start a compost bin, setting your heat a little lower in the winter, and cutting down on plastic usage. He says it all matters.

Protecting the planet goes beyond our responsibilities as global citizens.

It is something Jewish people should see it as an obligation too. Adamah, the namesake of the group Sanders now leads, means ‘earth’. According to Sanders, the word shows up in the Torah countless times. The text also shows that the planet is God’s creation and we are tasked with taking care of it. Environmental issues often connect with larger societal problems. Droughts can lead to water shortages. Extreme storms can force people from their homes. Poor air quality affects the wellbeing of all living things. All these issues call on us to follow Jewish principles like Mitzvah and Tikkun Olam. In other words, the mission to save the planet is just not for the environmentalists. It is for all who believe in social justice and doing good for others. 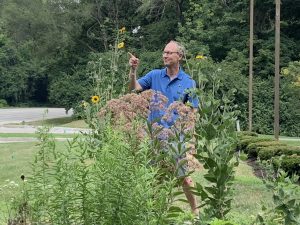 If this mission is one you would like to be a part of, Sanders says there are plenty of upcoming opportunities to get involved.